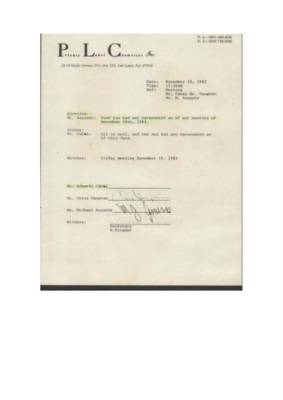 Compelling evidence of Mr. CabalÂ´s habilities and qualifications to do his job was given during the year of 1982 when Envirodyne EngineersÂ´ attorney, a Mr. Jay Schiller, clearly stated EnvirodyneÂ´s willingness to re-hire Mr. Cabal at a later date. 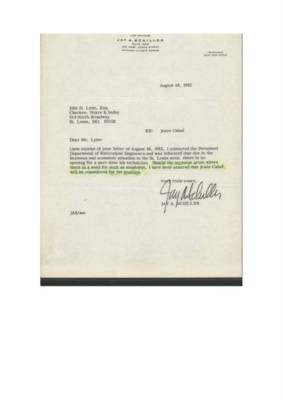 This is page 158 of Mr. Paul MyersÂ´ deposition in which he clearly states that a senior employee of Envirodyne Engineers, Inc., had told him that he was prejudiced against people of Hispanic heritage before Mr. Cabal had joined "Envirodyne" as an employee. 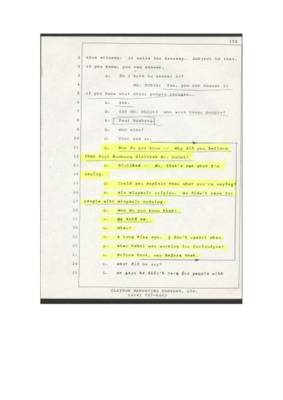 Page 1 of the Deposition given by a Mr. Paul Myers from Envirodyne Engineers, Inc., who during the year of 1984 gave compelling evidence indicating that there was racial prejudice against Mr. Cabal when he was employed at such company in Saint Louis, Missouri. 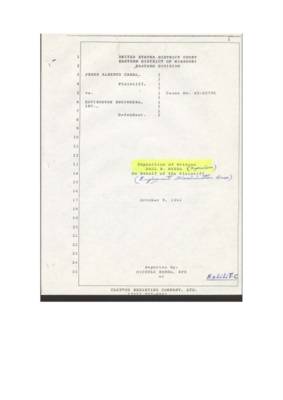 Jesus Alberto Cabal was born on June 19, 1956 in Colombia, South America, country where he acquired his high school education. In 1980 he graduated from the University of Puerto Rico with a degree in Chemistry, and during the eighties and nineties Jesus Alberto was mainly employed as a Process Chemist by several chemical companies in the United States some of which gave him excellent letters of recommendation during and after his services. (Those exhibits do appear in this web page). Upon knowledge and belief during the year of 1983 former president Ronald Reagan did issue an Executive Order suspending his constitutional rights within the United States after Jesus Alberto filed employment discrimination and defamation charges against two previous employers. All seems to indicate that the goal of such action was to ensure that he could not recover monetary damages he had sought in compensation from said employers. It is his understanding that the facts surrounding such presidential action are âclassifiedâ under U.S National Security statutes, most likely to cover up wrong doing. Oral evidence that Executive Orders were in fact issued was given to Mr. Cabal in several states of the Union by different people whom he met throughout the years and who did not know each other. Those individuals told him basically the same story in regard to a presidential intervention aimed at suppressing his legal rights within the States ensuring that he was deprived of due process of law, and thereafter of the possibility to vindicate his good name and to recover monetary damages for his injuries. Within this web page there is at least one exhibit showing details which tend to corroborate the fact that Mr. Reagan indeed issued such order. Moreoever, the âstrict censorshipâ surrounding all the litigation that Jesus Alberto filed in U.S Courts from the year of 1982 throughout 2003, do validate this fact for the simple reason that the evidence that Mr. Cabal presented to the courts was overwhelming to support his claims of employment discrimination and retaliation. Thus, Federal Judges could not possibly have ignored the facts or the overwhelming evidence backing up the law suits as was done in Mr. CabalÂ´s case, nor could those judges have compelled the news media to shut up and look the other way while this outrageous violation of human rights took place. The truth of the matter is that only the President of The United States could have dared to take decisions of this nature, and no one else. During the year of 2001 in the state of Texas two young âfemale thugsâ victimized Mr. Cabal after lying to him about their true identities, and thereafter stole from him an automobile that he had acquired the day before. In spite of the fact that Jesus Alberto had no criminal record whatsoever, and that the evidence (and their own confessions) showed that the young thugs had committed crimes in the past including but not limited to: Auto theft, prostitution, and drug abuse; he was charged with the alleged âaggravated sexual assault of a childâ. Later on, during the trial of the case the judge and the prosecutor would tell the jury that Mr. Cabal had to be convicted because (purportedly) under the Texas law invoked to prosecute him âthe facts of the case did not matterâ, not even the fact that Mr. Cabal was a legally blind person. Since the year of 1989 some of Jesus AlbertoÂ´s writings have been published in âThe National Poetry Anthologyâ; âThe Poetry Center â; âThe Michigan-Iliad Pressâ; âThe American Poetry Anthologyâ, and âThe Sparrowgrass Poetry Forumâ. Jesus Alberto Cabal also wrote a 620-page book entitled âTerrorizedâ which deals with the conspiracy at issue from 1982 throughout 2018. Unfortunately, no publishing houses in the United States have been willing to print it.