This is page #12 of an order issued by Federal Judge Perry from the U.S. District Court for the Eastern District of Missouri. In such order the judge does refer to the evidence presented to the court by Mr. Cabal as nothing else than a "Patchwork of Coincidences", and thereafter dismissed his claim going as far as imposing fines on Mr. Cabal in an attempt to intimidate him. The irony about her statement is that Rule 56 of the Federal Rules which governs matters dealing with summary judgment literally prohibits any judge to dismiss a law suit in which there is such a "Patchwork of Coincidences". In fact, the law on the issue clearly compels federal judges acting under similar circumstances to allow the matter to proceed to a trial before an impartial jury for proper disposition of the claim, something that Judge Perry refused to do. The same Judge also refused Mr. CabalÂ´s request that the news media be allowed to openly report the proceedings to the public as to ensure transparency. The conduct of the judge can not be explained in any rational manner other than she had been instructed by high government officials in the United States to deny due process of law to Mr. Cabal. 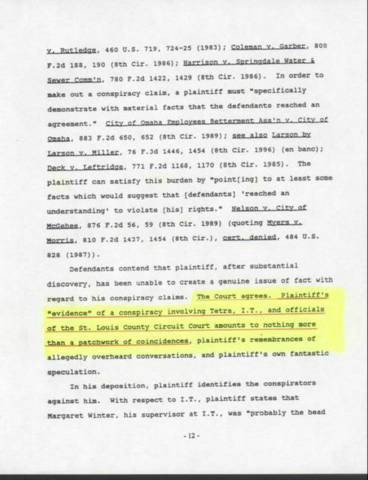