The photograph in the middle was published on the cover of "Alternative Media" during the spring of 1984. Such was the year when lots of rumors were flying everywhere within the United States about President Ronal Reagan suppressing Jesus Alberto CabalÂ´s legal rights within the country via a "Top Secret" Executive Order. 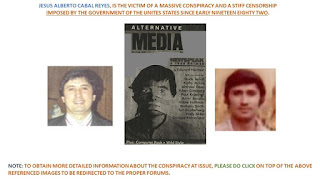 posted by Jesus Alberto Cabal Reyes at 10:44 am